Pathophysiology of transposable elements in the brain

Our team is interested in understanding the role of transposable elements (TEs) in the physiology and pathophysiology of the brain. TEs comprise the “dark side” of the genome of many organisms including humans and have gained growing interest as drivers of evolution but also as genomic elements associated with cancer, auto-immune and neurological diseases. We find the retrotransposon LINE-1 encoded protein ORF1p is expressed at steady-state in the mouse and human brain. Yet not much is known about the regulation and expression patterns of LINE-1 in the brain nor how this expression might affect brain physiology or pathophysiology. Recent evidence from our group suggests that an uncontrolled activation of LINE-1, normally repressed by various cellular levels of control including at the chromatin level, is at the origin of genomic instability in and stress-triggered degeneration of dopaminergic neurons (Blaudin de Thé et al, EMBO J, 2018; Ravel-Godreuil et al, iScience, 2021). However, it is currently not known to what extend and how the expression and activity of TEs is associated with and causally connected to neurodegenerative diseases (NDs). We currently investigate the hypothesis that chromatin decompaction triggered by brain aging or genetic factors leads to the de-repression of TEs which can be neurotoxic by inducing genomic instability and neuroinflammation. To study the cellular and molecular mechanisms that link TEs to neuronal physiology and pathophysiology, we use human, mouse and primate neuronal cells and brain tissues and, besides a wide-range of standard biochemical, cellular and molecular biological techniques, also next-generation sequencing and bioinformatics, proteomics, fluorescent-activated nuclei sorting and state-of-the-art imaging. Understanding the role of TEs in NDs will increase our understanding of the pathogenesis of Parkinson’s disease (PD) and Alzheimer’s disease (AD) but will also provide a new and original framework for the development of disease-modifying treatments. 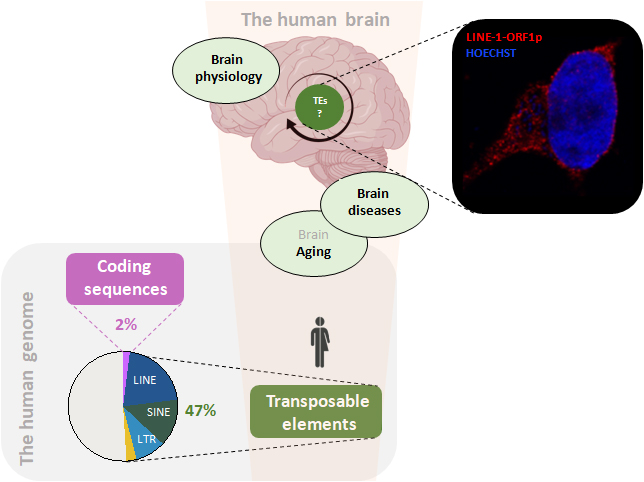 About half of the human genome is composed of sequences derived from transposable elements (TEs; Fig. 1). These mobile elements have self-amplified and shaped the human genome during evolution and contribute to gene regulatory networks. Although most of these sequences are now fossilized and immobile, certain retrotransposons (i.e. long interspersed nuclear element-1; LINE-1) have retained the potential for mobility in the human genome and others (i.e. human endogenous retroviruses; HERVs) have retained at least partial coding potential. We find that the LINE-1 encoded protein ORF1p is readily expressed throughout the mouse and human brain at steady-state. Yet not much is known about the regulation and expression patterns of LINE-1 elements, their RNA or encoded proteins in the brain nor with which proteins the LINE-1 encoded proteins ORF1p and ORF2p interact and how this might affect brain physiology and pathophysiology. Recent evidence from our group suggests that an uncontrolled activation of LINE-1 retrotransposons, normally repressed by various cellular levels of control, is at the origin of genomic instability in and stress-triggered degeneration of dopaminergic neurons. It is, however, not known to what extend and how the expression and activity of TEs is associated with and causally connected to neurodegenerative diseases (NDs) like Parkinson’s disease (PD) and Alzheimer’s disease (AD). Partially due to technical challenges related to the complexity and repetitiveness of TEs, these points have not been extensively studied yet. To address these open questions, we investigate the signature, regulation and pathophysiological consequences of TEs in the adult brain. We are particularly interested in understanding the impact of “coding TEs”, that is full-length LINE-1 and partially coding HERV elements on the physiology and pathophysiology of the brain. Although principles of TE biology (i.e. retrotransposition, LINE-1-associated DNA damage, LINE-1-induced inflammation, ORF1p/ORF2p functions) are operating alike in mice and humans, sequence, location and locus-specific expression patterns of LINE-1 and HERV elements are not conserved. We therefore use comparative analyses of mouse and human neurons and brain tissues to study TE regulation in response to aging and in the context of NDs.

The pathogenesis of age-related NDs, despite a tremendous increase in our knowledge, is still not well understood and these prevalent diseases crucially lack effective treatments. To address this hurdle, we investigate a novel, previously unrecognized axis in the pathogenesis of age-related NDs like PD and AD. Based on previous data from our team and other groups, we hypothesize that aging-induced global chromatin disorganization leads to the de-repression of TEs in neurons. Recent evidence from our group suggests that an uncontrolled activation of LINE-1 retrotransposons, normally repressed by various cellular levels of control, is at the origin of genomic instability in dopaminergic neurons. Others have shown that LINE-1 activation in the context of organismal aging and in specific genetic contexts leads to inflammation. Both, genomic instability and neuroinflammation are hallmarks of NDs. We have recently shown that LINE-1 activation causes neurodegeneration of dopaminergic neurons in the mouse ventral midbrain, a neuronal population vulnerable in PD (Blaudin de Thé, Rekaik, Peze-Heidsieck et al, EMBO J, 2018). Importantly, we have provided the proof-of-principle that anti-LINE-1 strategies (among which the FDA-approved antiretroviral drug stavudine) are neuroprotective in mouse models of acute oxidative-stress and PD (patent: PCT/IB2015/ 058404). In addition, artificial induction of epigenetic alterations in dopaminergic neurons leads to early activation of LINE-1 and late neurodegeneration suggesting that chromatin perturbations are sufficient to de-repress LINE-1 elements correlated with extensive neuronal DNA damage and late-onset neurodegeneration (Ravel-Godreuil et al, iScience, 2021). The activation or "de-repression" of LINE-1, i.e. during aging, could therefore be a central actor in the pathogenesis of PD and potentially other age-related NDs, and suggests that this pathway might be a “missing molecular link” between aging and neurodegeneration.

Currently, we are studying the cellular and molecular mechanisms that link TEs to neuronal physiology on the one hand and neurodegeneration on the other.
In summary, our studies will provide insight into how TE biology in the brain impacts brain physiology and how TE deregulation might be related to brain aging and the pathophysiology of age-related NDs. This could not only contribute to the understanding of the etiology of NDs, including PD and AD, but also open a new entry point for the development of therapies for causal treatments of these devastating diseases.