Amos Gitaï was born in 1950 in Haifa (Israel). He is the son of the Bauhaus-trained architect, Munio Weinraub, who fled the Nazi regime in 1933, and the intellectual and teacher, Efratia Gitaï, a non-religious expert on Biblical texts, who was born in Palestine in the early 20th century. He belongs to the first generation born after the foundation of the State of Israel, which was also strongly influenced by the major anti-establishment youth movements of the 1960s.

While still a student studying architecture, Gitaï was wounded during the Yom Kippur War (1973), when a medical evacuation helicopter in which he was traveling was hit by a Syrian missile. His entire œuvre then went on to draw inspiration from these biographical, family and generational themes, as well as the trauma he suffered during the war, and the sense of a victorious life.

After receiving a PhD in architecture from the University of Berkeley (California), Amos Gitaï devoted his first film, House (1980), to the construction of a house in West Jerusalem. This documentary, which was immediately banned in Israel, set the tone for the filmmaker’s antagonistic relationship with the authorities in his country, which was soon exacerbated by the fresh controversy provoked by his film Field Diary (1982). Gitaï settled in Paris and shot several films, both fictional works and documentaries, including Esther (1986), Berlin-Jerusalem (1989) and Golem, the Spirit of Exile (1991).

Amos Gitaï returned to Israel in 1993, the year in which the peace agreements championed by Yitzhak Rabin were signed in Washington. He directed a three-city trilogy: Devarim, shot in Tel Aviv (1995), Yom Yom in Haifa (1998) and Kadosh in Jerusalem (1999). Four of his films were shown in competition at the Cannes Film Festival (Kadosh, Kippur, Kedma, and Free Zone), and a further six at the Mostra in Venice (Berlin-Jerusalem, Eden, Alila, Promised Land, Ana Arabia, and Yitzhak Rabin: the Last Day).

In 2010, he published his mother Efratia’s correspondence1, which was read by Jeanne Moreau at the Odéon-Théâtre de l'Europe and on the France Culture radio station. In April 2018, the filmmaker donated his entire paper and digital archive of almost 30,000 items on Yitzhak Rabin to the Bibliothèque nationale de France (BNF). On 8th October 2018, a performance of Yitzhak Rabin: Chronicle of an Assassination Foretold, which was developed for the Festival d’Avignon in 2016, will be presented at the Philharmonie de Paris, notably featuring the soprano Barbara Hendricks.
Amos Gitaï’s work has received numerous awards, including a Leopard of Honour in Locarno for his lifetime’s work (2008), the Roberto Rossellini Prize (2005), the Robert Bresson Prize (2013), and the Paradjanov Prize (2014). He has been awarded the distinctions of officier des Arts et Lettres and chevalier de la Légion d’honneur. 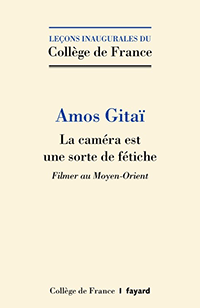