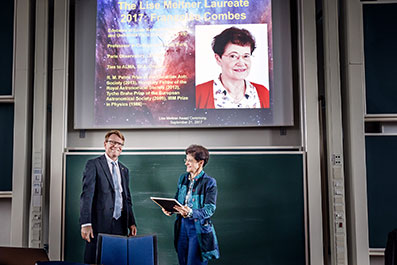 An extragalactic award to a star of astrophysics

“– I’m very honoured to receive this award and I’m also very impressed by Lise Meitner herself. She was a very strong and courageous woman who conducted her research when the conditions were very difficult for a woman. Only men were allowed in the laboratory’s, but she was persistent, had her vision and she understood nuclear fission,” says Françoise Combes, Professor at l’Observatoire de Paris. The Gothenburg Physics Centre awarded her "for ground-breaking work in extragalactic astronomy on fundamental aspects of the physics and evolution of galaxies."
– My research is about understanding how the universe has been formed. Since we still cannot explain the high velocities within a galaxy, for example when a star is moving, we need to find the answers. Either it’s the unknown particles dark matter that causes the force – or the law of gravity must be modified. In my research, we do simulations of galaxies and modified gravity, “says Françoise Combes.

She held an exciting lecture in connection with the award ceremony in Gothenburg. The talk entitled "When Supermassive Black Holes are Too Greedy" opened a window on the extragalactic parts of the universe. The holes actually absorb, or eat, more than they can digest and therefore they expel their “food” outside galaxies.

– Until 1920, we did not know that there existed other galaxies, outside our own. Now we know a lot more about extragalactic astronomy. Did you for example know that the Milky Way has a diameter of 100 000 lightyears, and the next big galaxy, Andromeda, is 3 000 000 lightyears away?”