Professor Françoise Combes who holds the Chair Galaxies and Cosmology at the Collège de France, together with an international team, has contributed to a research that is published today in the Nature Astronomy journal. Observations are demonstrating the existence of very active molecular clouds, producing a very high number of stars in a distant and hostile interstellar space.

The star clusters are formed by the condensation of molecular clouds, made of cold and dense gas found in all galaxies. The physical properties of these clouds in our galaxy or in nearby galaxies have been known for a long time. But are they identical in distant galaxies, located more than 8 billion light-years away? Thanks to a resolution never achieved before in a distant galaxy, an international team, led by the University of Geneva (UNIGE), and with the participation of French researchers, was able to detect for the first time molecular clouds in a Milky Way in the making. Their observations, published in the journal Nature Astronomy, show that these clouds have a higher mass, density and internal turbulence than in nearby galaxies and produce far more stars. Astronomers attribute these differences to the ambient interstellar conditions of distant galaxies, which are too extreme for the survival of the molecular clouds typical of nearby galaxies

Molecular clouds, the cradle of star formation, are well known in the Milky Way. But are they the same in distant galaxies that form more stars? Until now it was very difficult to isolate clouds in distant galaxies, for lack of spatial resolution. Astronomers then came up with the idea of benefiting from a natural telescope - the gravitational lens phenomenon - coupled with the use of ALMA (Atacama Large Millimeter / submillimiter Array), an interferometer of 50 millimeter-scale radio antennas that reconstruct the entire image of a galaxy instantly. Thanks to the alignment of a massive object between the observer and the distant object, the gravitational lenses produce a magnifying effect, and considerably enlarge the size of the distant object studied. This resolution, further improved thanks to the ALMA interferometer (resolution of 0.2 ’’) made it possible to characterize the clouds individually in a distant galaxy, nicknamed the Cosmic Snake, located at 8 billion light-years (see Figure 1). 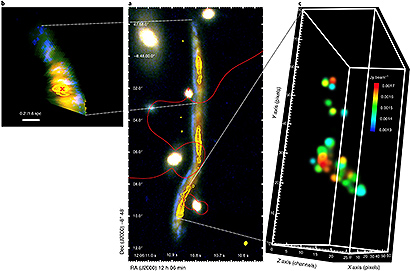 These observations revealed that the molecular clouds of distant galaxies had a mass, density and turbulence 10 to 100 times higher than the clouds of nearby galaxies. Yet this galaxy is "normal" for its epoch, and is not subject to a starburst. The international team has also discovered that the level of star formation efficiency of the Cosmic Snake’s molecular clouds is particularly high, favored by the large internal cloud turbulence. In nearby galaxies, a cloud forms about 5% of its mass in stars. In distant galaxies, this figure jumps to 30%.