From Roman thermae to the Collège de France

Archaeology of the site and history of the buildings

The work connected to the fitting-out of the Collège’s basements involved archaeological excavations beneath the three courtyards – the cour d'Honneur, or main courtyard, the Letarouilly courtyard (named after the architect who built the western part of the Collège in the 19th century) and the Budé courtyard, with a total surface area of approximately 1,200 sq. m. - , and revealed the presence of remains superposed over several metres. 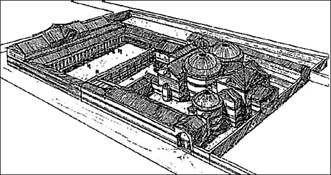 The oldest traces go back to the last third of the 1st century B.C., when Gallo-Roman Lutetia was founded.

On the slopes of Sainte-Geneviève Mountain, very modest dwellings were initially built after which vast pits were dug to extract the gravel needed for laying the new roads including the large main north-south road (the cardo) forming Rue Saint-Jacques today.

Small houses, workshops and a warehouse, built in the first half of the 1st century AD, were destroyed and razed at the end of the same century.

A vast thermal establishment was then built, the oldest in Lutetia, covering at least 12,000 sq. m., with a palestra and numerous rooms, courtyards and gardens (fig. 1). Like many other Roman monuments, the ‘thermae of the Collège’ were abandoned at the end of the 3rd century, but the area was not deserted for all that: craftsmen and tradesmen (in particular a butcher) set up in the more or less patched-up ruins, and vegetable gardens bordered on hovels made of perishable materials; in short, a certain life subsisted, at least until the 9th century. 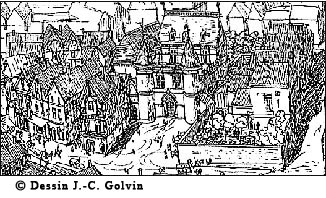 All the levels from between the 9th and 13th centuries have disappeared, erased by subsequent constructions. In the 14th century, the sector was divided into ‘strips’, each parcel of land including a house (to the north) and a courtyard or garden to the south. From the archives, we know the names of some of these houses (House of the Rose, House of the Crenellations, etc.). The excavations uncovered their basements: very well-built cellars (their walls serving as foundations for the superstructures that rose two to four storeys), as well as pits for diverse uses: cisterns, dumping grounds, ice houses, fish tanks— and, a little later on, latrines.

These houses were acquired by important individuals desirous, like many others, of creating ‘Colleges’, which would house students from the provinces drawn to Paris by the glory of its University. In 1325, the precentor of the church in Tréguier established the ‘Collège de Tréguier et de Léon’ for poor Breton students. Some twenty years later, the bishops of Cambrai and Langres and the archbishop of Reims founded the ‘Collège des
trois Évêques’ (College of the Three Bishops), which very soon came to be called the ‘Collège de Cambrai’. The two new Colleges either destroyed or refurbished the aforementioned houses. The excavations, confined to the part corresponding to the ‘Collège de Cambrai’, provided information about it, which, added to that from the
archives, allowed for reconstructing (hypothetically) the configuration of the quarter in the 16th century (fig. 2). 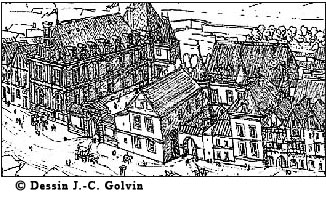 First half of the 18th century.

To the left: the new ‘Collège Royal', consisting of a wing and the beginning of a perpendicular extension. (fig.3).

When, in 1530, at the instigation of Guillaume Budé, François I created the corps of ‘royal readers’, he did not grant them any premises. However, in 1539, he decided on the construction of a ‘fine, large college, accompanied by a beautiful, lavish church, with other edifices and buildings’. The planned site was the one currently occupied by the Institute, but the king died before the project began.

Henri II then requisitioned premises in the Colleges of Tréguier and Cambrai, a makeshift solution. Henri IV resolved to acquire both these edifices in totality, to raze them and have built in their place a Royal College worthy of the name and whose plans were drawn up by Claude de Chastillon. Upon the king’s death, the Regent, Marie de Médicis, acquired part of the ‘Collège de Tréguier’ and, with the young Louis XIII, laid a
foundation stone (which has miraculously been found again). In 1612, the Crown began to buy buildings belonging to the ‘Collège de Cambrai’. Of the vast edifice planned by Claude de Chastillon, only the western wing and the initial section of the southern wing were built (fig. 3). In spite of protestations from both professors and their auditors, the ‘Collège Royal’ remained in this state for a century and a half.
In 1772, Louis XV signed letters patent granting 120,000 pounds ‘to be used in repairs to the ‘Collège Royal’ and the construction of new classrooms’. Entrusted to the architect Jean-François Chalgrin, the work was carried out in six years, creating, round the main courtyard, what is now called the Chalgrin building, the heart of the Collège. However, an engraving from 1779 proves that the project had not been carried through to completion,
with buildings continuing to occupy a vast area towards the Rue Saint-Jacques (fig. 4). It was only in the mid-19th century that the Collège—having become ‘de France’—was able to expand westwards, and that the architect Paul Letarouilly built the pavilions and courtyards still visible today. 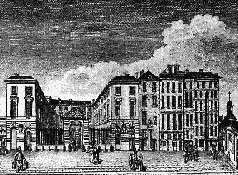 The Collège constructed by Chalgrin. Buildings subsist towards the Rue Saint-Jacques (fig.4).

What the excavations reveal

What the excavations revealThe excavations firstly contributed entirely new information on the pre-14th century remains, and subsequently clarified or illustrated archival sources including architects’ documents. For example, thanks to archives, it was known that Letarouilly had designed two successive projects for the expansion of the Collège. However, it was not realized that the first one had been implemented. The excavations uncovered its foundations: powerful arches whose voussoirs bear marks of the contractors. An impressive construction. Then everything was abruptly abandoned. Why? Probably becausefundamental obstacles had arisen.

Considerable archaeological material was also gathered, spanning the origins to the contemporary era, notably series of unusual potteries including some not widely known. Varied scientific analyses revealed information on the environment, food and even illnesses of men of the period. Above all, they allowed for a better grasp of the long history of a small corner of Lutetia, then of Paris, and the surprising vicissitudes of one of France’s oldest institutions.