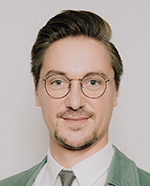 After a PhD in Ancient History from the Universities of Paris Nanterre and Montreal (2019), a Master’s Degree in Classics and Archeology from the École Normale Supérieure (2014) and a Teaching Certification in Classical Philology (Agrégation de Lettres Classiques in 2012), Manfred Lesgourgues has joined the chair Religion, history and society in the Greek Ancient World as a Teaching and Research Assistant (ATER) in September 2020.

As part of his PhD thesis, he studied the practice of divination in the seven most documented oracular shrines in the Greek World, from the end of the Classical period to the Imperial period. His purpose was to better understand how mantic rituals created special knowledge—the oracle—by reconstructing precisely in which context it was produced. He questioned the central place traditionally granted to inspired agents and religious enthusiasm and showed that oracular rituals in fact gathered together an important number of agents whose collaboration was crucial in establishing communication with the gods and giving form to their oracles. His current research is focused on the way oracles and divinatory rituals are referred to in historical, rhetorical and political discourses.